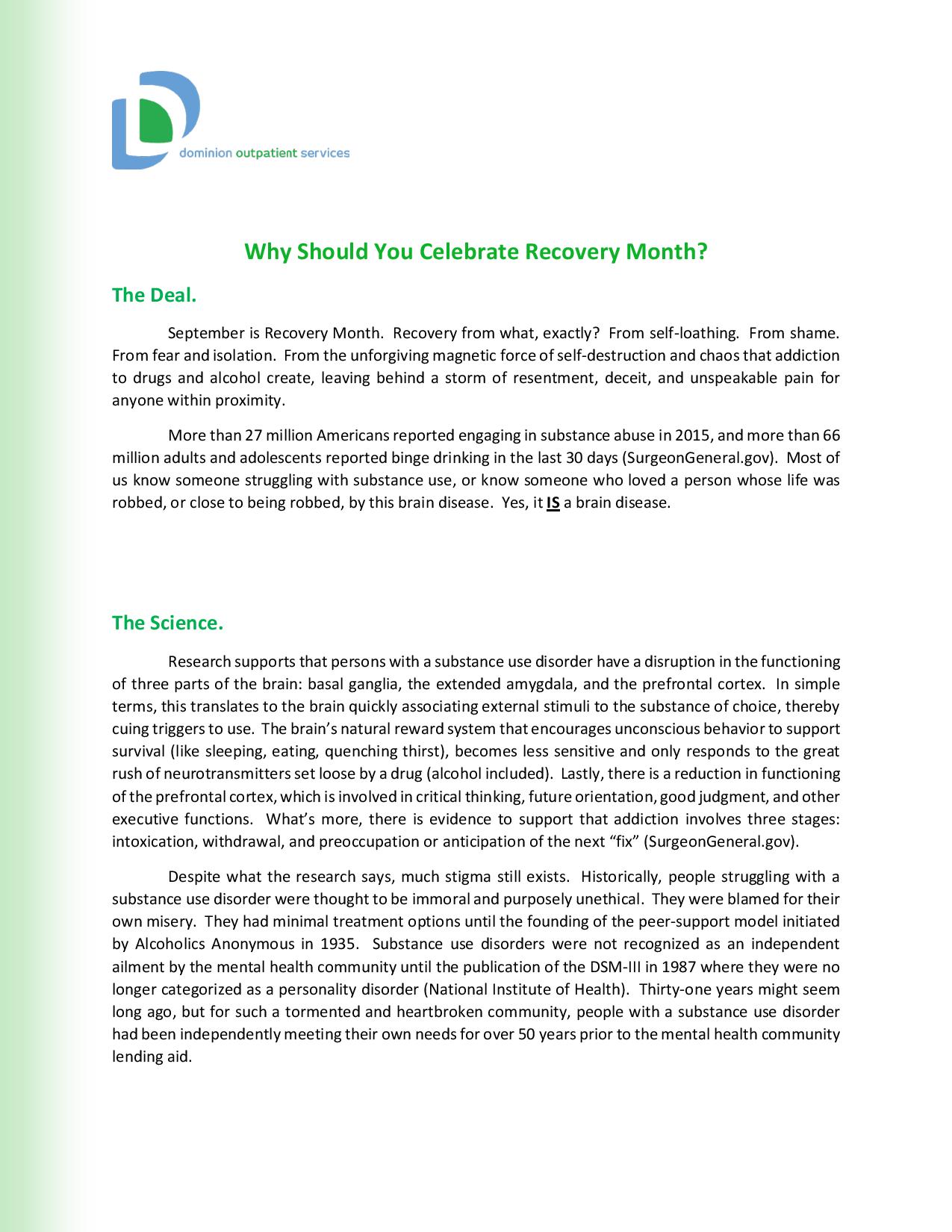 Why Should You Celebrate Recovery Month?

September is Recovery Month.  Recovery from what, exactly?  From self-loathing.  From shame.  From fear and isolation.  From the unforgiving magnetic force of self-destruction and chaos that addiction to drugs and alcohol create, leaving behind a storm of resentment, deceit, and unspeakable pain for anyone within proximity.

More than 27 million Americans reported engaging in substance abuse in 2015, and more than 66 million adults and adolescents reported binge drinking in the last 30 days (SurgeonGeneral.gov).  Most of us know someone struggling with substance use, or know someone who loved a person whose life was robbed, or close to being robbed, by this brain disease.  Yes, it IS a brain disease.

Research supports that persons with a substance use disorder have a disruption in the functioning of three parts of the brain: basal ganglia, the extended amygdala, and the prefrontal cortex.  In simple terms, this translates to the brain quickly associating external stimuli to the substance of choice, thereby cuing triggers to use.  The brain’s natural reward system that encourages unconscious behavior to support survival (like sleeping, eating, quenching thirst), becomes less sensitive and only responds to the great rush of neurotransmitters set loose by a drug (alcohol included).  Lastly, there is a reduction in functioning of the prefrontal cortex, which is involved in critical thinking, future orientation, good judgment, and other executive functions.  What’s more, there is evidence to support that addiction involves three stages: intoxication, withdrawal, and preoccupation or anticipation of the next “fix” (SurgeonGeneral.gov).

Despite what the research says, much stigma still exists.  Historically, people struggling with a substance use disorder were thought to be immoral and purposely unethical.  They were blamed for their own misery.  They had minimal treatment options until the founding of the peer-support model initiated by Alcoholics Anonymous in 1935.  Substance use disorders were not recognized as an independent ailment by the mental health community until the publication of the DSM-III in 1987 where they were no longer categorized as a personality disorder (National Institute of Health).  Thirty-one years might seem long ago, but for such a tormented and heartbroken community, people with a substance use disorder had been independently meeting their own needs for over 50 years prior to the mental health community lending aid.

You (yes, you!) can play a crucial role in advancing access to treatment.  To reduce the barriers to treatment, an important step is fighting stigma.  This starts not only with education, but also getting real with ourselves and being brave enough to reflect on our own attitudes towards people with a substance use disorder.  This includes the adoption of non-shaming, person-centered language.  “Addict” and “alcoholic” perpetuate stereotypes that have been used to blame such a person for their own despair.

Examine your own values surrounding substance abuse.  How important is drinking personally in your life?  Is drinking or using illicit substances part of your measurement of a good time?  The Center for Disease Control and Prevention classify binge and heavy drinking as forms of abuse.  Binge drinking for women equals the consumption of 4 drinks or more on one occasion, and 5 or more for men; whereas heavy drinking for women is defined by the consumption of 8 drinks or more within one week, and 15 or more for men.  (A “drink” is classified as: 12 oz beer = 10 oz craft beer = 8 oz malt liquor = 5 oz wine = 1.5 oz “hard liquor”.)

There are many paths to recovery with proven success.  Be patient, it can take several treatment attempts to piece together long term recovery.  Professional treatment options provide a continuum of care to meet a person’s individualized needs, from inpatient residential, partial hospitalization, and intensive outpatient.  There is a plethora of community resources that easily work in tandem with professional efforts.  Specialties exist for military, women, trauma, dual diagnosis, and other unique populations.  Dominion Care Outpatient Services would like to help you celebrate recovery.  Please give us a call so that we may be part of your journey in finding a treatment that is best for you or your loved one, (804) 272-2000.

Email to a friend